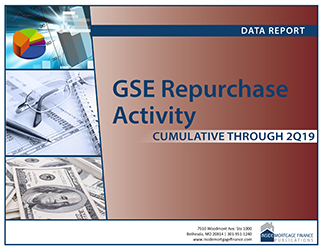 More than 4,500 sellers and originators were party to the government-sponsored enterprises’ demands and 3,800-plus companies — from Countrywide ($9.4 billion) and Bank of America ($5.2 billion) to BankAtlantic ($5,000) and BancBoston Mortage Corp. ($1,000) — made repurchases.

In a comprehensive data report, GSE Repurchase Activity: Cumulative to Second Quarter 2019, Inside Mortgage Finance looks at the GSE buyback record lender by lender and year by year. In this report, you’ll find details on every lender who has faced a buyback demand from either Fannie or Freddie since 2009. You’ll know how much they paid, and how much of it relates to each vintage of MBS. And you’ll know how much they got Fannie and Freddie to back down on.